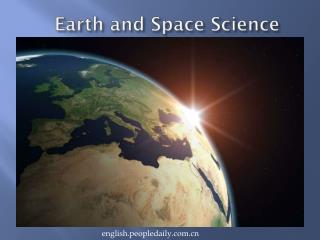 EARTH SCIENCE CHAPTER 15 - . glaciers. glaciers.  chapter 15 glaciers i. what is a glacier? mass of moving ice

Earth and Space Science - . by gabby guyer. chapter 1. sect 1: exploring earths surface. earths topography is made up of

Astronomy - . earth science r. i. what is astronomy?. astronomy is the study of the universe. a. astronomical measures.

Earth Science Review - . will you be ready or will i see you in september?? again. things to bring!!!. pen 2 sharpened