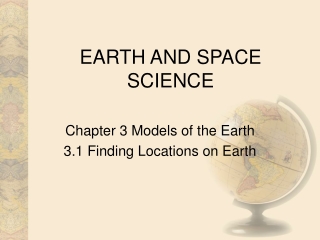 The Methods of Science - . integrated science 9. science. science is a process that uses observation and investigation to

IV. Section 3 Using Space Science on Earth - . a. the challenges of space. vacuum-empty of all matter space craft must be

Earth and Space Formative Assessment - . evolution of astronomy as a science: part i. 1. a heliocentric universe puts

Earth/Space: Beginning with Science - . what are the different “spheres” of the earth?. the spheres of the earth

Using Space Science on Earth - . lesson 4, chapter 2. the challenges of space. conditions in space that differ from those

Earth Science - . eq – what is earth science? earth science – the study of the earth and the universe around it.

Earth in Space - . astronomy; science explorer, prentice hall. why does the earth have day and night?. astronomy : the

Why Earth Science? - . nearly everything we do is connected to the earth: its land, soil, rocks, minerals, atmosphere,

Section 1: Earth in Space - . how does earth move in space? what causes the cycle of seasons on earth?. how earth moves.

Earth and Space Science - . (7)  earth in space and time. the student knows that scientific dating methods of fossils