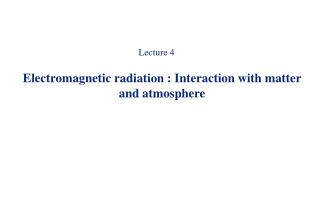 Interactions of radiation with Matter - . interaction with beta. electrons excited or kicked off. ionization energy

INTRODUCTION TO SPECTROSCOPY - . spectroscopy. spectroscopy is a general term referring to the interactions of various

Illumination Radiation &amp; The Atmosphere (x 2) Interaction with the Target Detection - What is remote sensing.

Radiation and Climate - . the electromagnetic spectrum and solar radiation. earth’s

Electromagnetic radiation - . recap from last time: light travels at 300,000 km/s. it is a form of electromagnetic