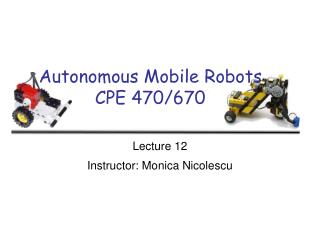 The Future of Mobile DNA - What's your prediction regarding the mobile industry in the next 3-5 years (2015-2018)? check

Movement of robots and introduction to kinematics of robots - . kinematics: constraints on getting around the

Autonomous Haulage Trucks - the new way to mine - . john a. meech university of british columbia the norman b. keevil

Multi-Robot Systems - . “the mob has many heads but no brains”. -- english proverb. today's’ objectives. to

Do you want a robot to cook your dinner, do your homework, clean your house, or get your groceries Robots already do a