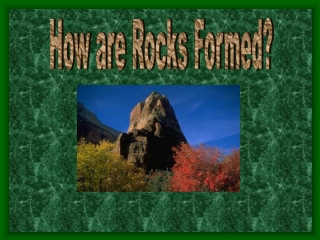 How are Rocks Formed?. Engagement. Observe the sample rocks and choose one and write a description. (using your five senses). Students will observe and classify characteristics of rocks and read text pp. 198-199 in order to create a “3 Tab” foldable. Objective:. Rocks. Identification of Soils and Rocks - . ii. * classification of rocksaccording to their mode of origin, rock materials are

All igneous rocks are formed from liquid rock known as __________? - . magma. what property is used to classify

Igneous Rocks - . formation, absolute age, radioactive dating and unconformities. what is an igneous rock?. aka: fire

Igneous Rocks - . by: will dinsmore kameron simpson caroline jennings jakobee threatt. what are igneous rocks and how are

Geology - . how to identify what kind of rock it is, find how rocks are made, and what they are used for. the three