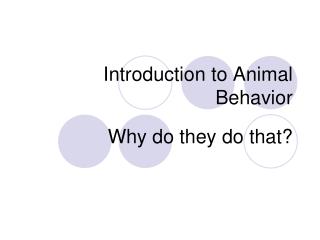 Introduction to Animal Behavior. Why do they do that?. Warm Up. Personification: Putting human characteristics onto animals to explain behavior Youtube: http://www.youtube.com/watch?v=f-Kt_kuYVtU. Unit Map: Follow Along in your packet. WHAT ARE YOU LEARNING? Fish Behavior - . animal behavior. action or re-action to stimuli happens in the brain (non-motor) and can be manifested

Animal Behavior - Chapter 51. animal behavior. the theme of biology, which puts all aspects of biology into context:. the

The University of New Mexico &amp; The Office of Animal Care and Compliance - . present basic biomethodology for