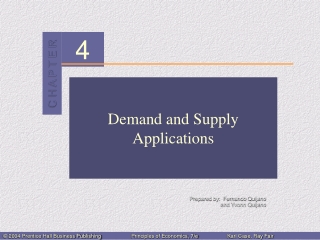 DEMAND AND SUPPLY APPLICATIONS - 5. demand and supply applications. chapter. price rationing. the process by which the

Applications of Demand and Supply - . chapter 4. the personal computer market. invention of the microchip reduced the

Demand and Supply: Elasticities and Applications - . chapter 5. price elasticity of demand. the responsiveness of

DEMAND AND SUPPLY - . an increase in demand begins the process of job creation . the next slide is a simple explanation

Supply and Demand - . economic definitions for demand. demand: the total amount consumers are willing and able to buy at

Demand and Supply - . this material is about markets and how price and quantity traded are determined in a market.