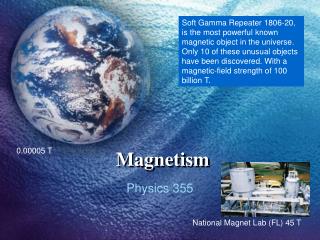 Soft Gamma Repeater 1806-20, is the most powerful known magnetic object in the universe. Only 10 of these unusual objects have been discovered. With a magnetic-field strength of 100 billion T. Magnetism. 0.00005 T. Physics 355. National Magnet Lab (FL) 45 T. From whence does magnetism come?. Magnetism - . strange stones. a young shepard named magnes discovered magnetism when iron nails of his sandal stuck to a