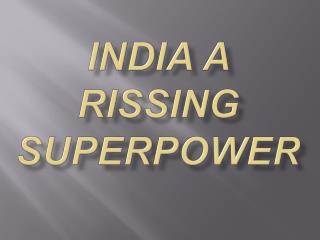 India A Rissing SuperPower. Introduction. A superpower is a state with a leading position in the international system and the ability to influence events and project power on a worldwide scale ; it is considered a higher level of power than a great power . India: An Economic Superpower? - . jayashankar m. swaminathan. india: past. the indus valley (1500 bc) as well as

The Dawn of India As A Superpower - . vairag kothari 1 st year e.e g.h patel. india leads in the progress. economy

Is This How a Superpower Works? - . from founding to the 2012 election outline. how the us chose to do foreign affairs

Discovering your SUPERPOWER - . the (award winning) week of reflection 2014. a week to think about what you’ve learned

A World Superpower: The Persian empire - . a time of transition. the northern kingdom of israel falls in 722 to sargon ii

The Soviet Union as a Superpower - . chapter 30 (3 of 4). soviet union a world power after ww2. built up military and

Psychometry: A Cryptic Science Or A Mystical Superpower - For more such interesting psychic stuff, visit and sign up free

The USA: A G20 Country and Superpower - . national modern studies international issues. aims:. identify the role of the

Australia as a Food Superpower: Goal or Dream? - . a global foundation team has created a 10-point national food plan to