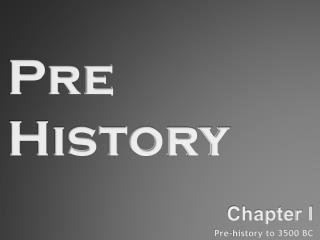 Pre History. Chapter I Pre-history to 3500 BC. PRE-HISTORY. Problems to Solve TEXT. PRE-HISTORY. Vocabulary Historians—people who study history Pre-history—the period before writing was developed Archaeology—Study of past societies Anthropology—study of human life and culture. PRE-HISTORY - . paleolithic and neolithic societies to the rise of cities. evolution of human society. the hominids

PRE-HISTORY - . paleolithic and neolithic societies to the rise of cities. evolution of human society. the hominids

Pre-History - . time before writing was invented misconceptions: people did have a spoken language they did not all grunt

PRE-HISTORY - . evolution of man. homo habilis . 3 to 1 million years ago larger brain than ape made simple tools from

Pre-History - . a look back at the earliest of humans and their settlements. bell-ringer. what do you know about the

Pre-History Notes - . people lived for hundreds of thousands of years before the beginning of pre-history, but little

From Pre History to History - . overview for chapter 1. the big picture: how old is time?. most of human existence

A Pre-History to America - . motives for coming to america. henry viii. henry viii became king in 1509 when his father