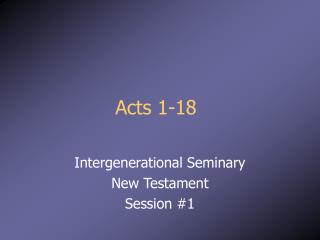 Acts 1-18. Intergenerational Seminary New Testament Session #1. Basics of the New Testament (review). How did the NT come about?. Took a while Early Christians were very “eschatological” First form was letters (fit with eschatology): Pauline Acts of the Apostles, Acts 18:1-28 - . paul's year and a half at corinth. ruins of ancient corinth. introduction. from

Acts of the Apostles, Acts 17:1-18 - . second journey - to thessalonica, berea and athens. introduction. paul and

Acts 17:18-22 - . .then certain philosophers of the epicureans, and of the stoicks, encountered him. and some said, what

From Zero to One Acts 18:1-11 - . going where the gospel is not and leaving a multiplying church. who is involved in

Acts 1:1-8 - . miracles, signs, and wonders. sound biblical teaching. making a difference in our