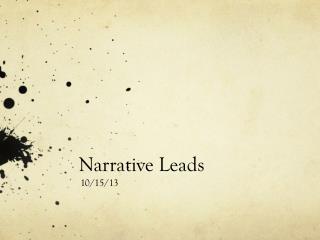 Narrative Leads . 10/15/13. DO NOW. Take out your rough drafts. The class will stand in a circle. Ms. Matassa will toss the ball to a student. The student will read the lead of their narrative to the class. Narrative Leads - . an invitation into the story. what is the function of the lead?. sets the tone determines the content

TYPES OF NARRATIVE LEADS - . the action lead. a loud crash in the night woke me out of a sound sleep, and i began to

Narrative - . periods 2-4. brainstorm a list of your personal “basic principles,” values, or rules to live by. list

NARRATIVE - . valentina widya.s. social function. is to entertain, to gain and hold the reader’s interest in a

Narrative - . my favourite 3 narratives. the giver by lois lowry the railway children by edith nesbit silverwing by

Narrative - . what’s a narrative?. a narrative is a story, told in many ways: a short story, a book, spoken word, a

Narrative - . the narrative or “telling of a story” is the part of the movie that people respond most to. this