How would you define the process of decolonisation? - PowerPoint PPT Presentation 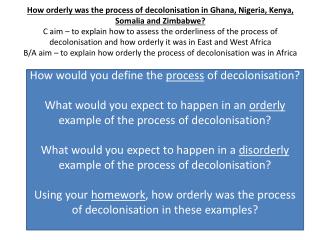 How would you define the process of decolonisation?

How would you define the process of decolonisation?

Planning is the basic function of Management. Describe briefly the steps involved in a Planning Process. - For assignment

Affirmations in MI - . mint forum, sitges, june 2009 carl Åke farbring. … it happens, but rarely that one of us

Should the Confederate Flag be Banned? - . read the

Declaration of Competing Interests - What factors affect bundle uptake in a voluntary quality improvement campaign? an

pushing the boundaries for change honoring the child, honoring equity - From the margins to the centre: repositioning

Decolonizing Methodologies - . research and i ndigenous p eoples. introduction. the term research is one of the