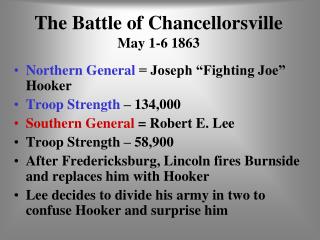 The battle of Chancellorsville - . by: mills sullivan. where and when did the battle take place?. started on april 30 th

The Gettysburg Address and the Battle of Gettysburg 1863 - . by: henry schellinger , alice huang, miranda mireles , jenna

CHANCELLORSVILLE - Fought from may 1 st – may 3 rd , 1863 it was fought in the vicinity of spotsylvania, virginia, near

Chancellorsville - . may 1-4, 1863. objectives. students will learn how the north reacted to their defeat at

Save Chancellorsville - . http://www.usa-civil-war.com/. why is this place so important?. a major civil war battle was

The Battle of Arras – April-May 1917 - . aim of the battle was to divert german attention away from a major french