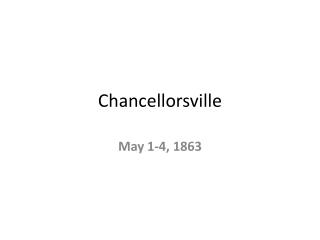 Chancellorsville. May 1-4, 1863. Objectives. Students will learn how the North reacted to their defeat at Fredericksburg. Learn the changes made by Joe Hooker. Learn how Hooker’s plan fell apart. Learn how Chancellorsville was the South’s greatest victory, and their most costliest. CHANCELLORSVILLE - Fought from may 1 st – may 3 rd , 1863 it was fought in the vicinity of spotsylvania, virginia, near

Save Chancellorsville - . http://www.usa-civil-war.com/. why is this place so important?. a major civil war battle was

The battle of Chancellorsville - . by: mills sullivan. where and when did the battle take place?. started on april 30 th

Battles of Fredericksburg and Chancellorsville - . the union tried to divide the confederate army at fredericksburg, but

American Civil War (1861 – 1865) - . themes . compare and contrast north and south highlight some of the important

Battle of Marathon - . objectives: you should know the key character and what happened at the battle of marathon. you

Civil War Review - . the biggest even in american history (seriously). what were the long term causes of the civil

Civil War Timeline - . december 1860.  south carolina seceded from the union in 1860 after abraham lincoln was elected