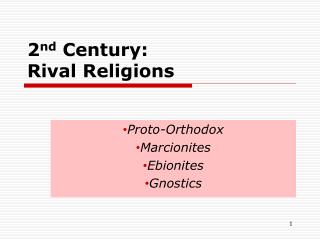 Religions - . miss sarah a. smith 6-2. islam. origins: originated in the arabian peninsula in the city of mecca. founder:

Are There Rival Causes? - . csit58 chapter 10. rival cause. another reasonable interpretation that can explain why a

Church History-2nd Century - . st. demetrius-12 th pope of alexandria and some of the school of alexandria's scholars.

Rival Plans for Reconstruction - . 12.1. objectives. explain why a plan was needed for reconstruction of the south.