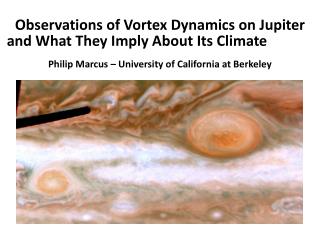 Observations of Vortex Dynamics on Jupiter. and What They Imply About Its Climate. Philip Marcus – University of California at Berkeley. 1998. 2007. Climate Change on Jupiter?. Starting in 2001 we began publishing claims that Jupiter would have a significant climate change Diana Baumrind - . styles of parenting. background. born in new york city in 1927 completed her b.a. in psychology and

Computers for the PostPC Era - . dave patterson university of california at berkeley patterson@cs.berkeley.edu

Relational Algebra and Calculus: Introduction to SQL - . university of california, berkeley school of information is 257: