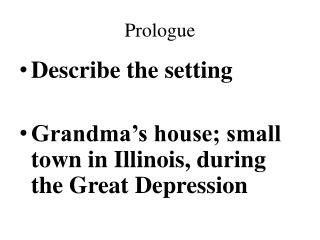 Prologue. Describe the setting Grandma’s house; small town in Illinois, during the Great Depression . Prologue. What point-of-view is the story told? First person. Prologue. Who is the speaker? Joey Dowdel. Shotgun Cheatham’s Last Night Above Ground. Prologue - . an introduction to historical inquiry. what is history?. “when does history happen?”. barbara tuchman

Prologue - . the prologue was a convention in elizabethan plays. in latin its name literally means “the talking that

Prologue - . self-citation more than 7 papers at places of least relevance. nothing new except for the problem. we

Prologue - . parallax. logistics. homework if you are not signed up - sign up! tutor (tbd - drop in time? - one on one?)

PROLOGUE - . summariser. 13 march 1940, caxton hall, westminster, london udham singh is at a meeting, in which many

Prologue - . describe the setting grandma’s house; small town in illinois, during the great depression. prologue. what

Prologue - . designer: eric kimsey the following powerpoint presentation was designed to fulfill the requirements of the

Prologue - . a: hola! want to know about ‘conman’, the new interactive tool?? b: thanks , i had enough of this