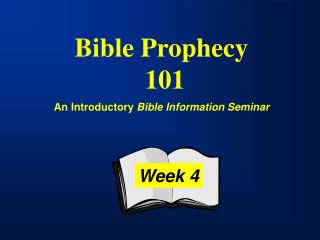 Bible Prophecy - Christians are to have nothing to do with psycics , horoscopes, palm-reading, or fortune telling – it

Jerusalem in Bible Prophecy - . presented by pastor bill allen. luke 21:5-6. and as some spoke of the temple, how it was

Prophecy &amp; The Bible - . the bible is totally reliable and trustworthy who feeds you?. why do we need prophecy?.

Arabs in Bible Prophecy - . the arabs in prophecy. arabs and israel in the news who are the arabs the reason for the

Bible Prophecy and the Prophecy of Nostradamus - The bible and nostradamus. the bible claims to be uniquely inspired by

Bible 101 - . dean biebert, pastor shepherd of the hills church. lesson two:. the beginning of the world and its

Bible 101 - . dean biebert, pastor shepherd of the hills church. lesson nine:. god uses the lord’s supper to get to us.

Our Day in Bible Prophecy - . the united states in bible prophecy. introduction. prophetic panorama of world empires. is

ISLAM IN BIBLE PROPHECY 3 - . by manjit biant. what happened in

Our Day in Bible Prophecy - . “where does bible prophecy say we are?”. i. we don’t know the exact date of jesus’