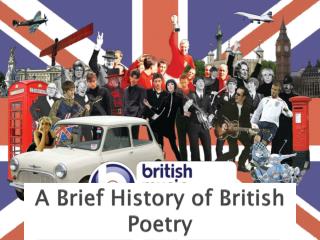 A History of Reserves in British Columbia - . the royal proclamation of 1763. issued by king george iii (britain) after

Poetry Live! - . a history of poetry at presidential inaugurations. will history repeat itself?. three times in u.s

POETRY MEMORIZATION - . sara sánchez hope college. good poetry teachers:. like poetry and are enthusiastic about it;

Zen Poetry - . what it is… who invented it… how it works…. a poem of my own creation… competition.. end. . what

Unit 1: Poetry - . english 9. what is poetry? what is included in this broad term? what constitutes poetry? ***

Theatre History - . theatre around the world. british theatre. the theatre of the british isles entered the modern age

“Great poetry is always written by somebody  straining to go beyond what he can do.” - . poetry. what is poetry?

British History: An Introduction - . part 1 – early years. why is history important?. history can give meaning and

The Heartbeat of History - . psalms 90. the heartbeat of history. oldness vs. usefulness antiques what they are when

History of British Ballet - From the diaghilev era up to frederick ashton. history of british ballet. learning