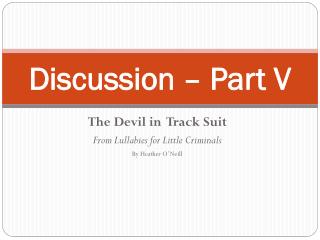 Discussion – Part V. The Devil in Track Suit From Lullabies for Little Criminals By Heather O’Neill. I was almost thirteen and [Jules] thought I was old enough to be left alone in the house. I didn’t think that I was because I was still afraid of the dark. (142). Geico commercial - . i’ts funny and it’s true!. part 1. why are thu people so sad like chicken without thee leg?.

Discussion I - . discussion. answer the question posed in the introduction explain how the results support the answer how