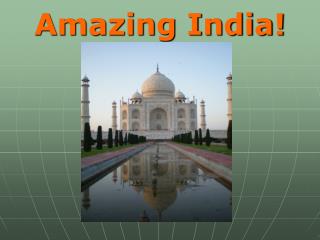 The Amazing World of 3-D - By: tony shindeldecker click to start the purpose of this slideshow is to: reinforce the

The British Rule of India - . ian woolford department of asian studies the university of texas at austin. the british

God's Amazing Creation - What can we learn about god from the universe he made? jeff zweerink azusa pacific university,

A Passage To India - E.m. forster. forster began writing a passage to india in 1913, just after his first visit to india.

The Truth About Austin’s Amazing Bats - . day 3. concept talk. how can unplanned situations have positive outcomes?.

IGLOO - . by sally, jinny and tina. amazing igloo #1. in the 52nd venice biennale igloo has been invited to show the