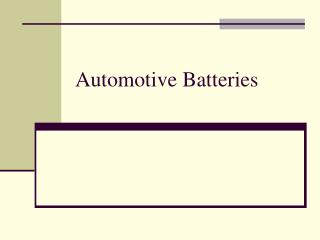 Automotive Batteries - . chapter 29. basic battery principles. batteries only store power, they do not create it.

Automotive Batteries - . chapter 29. basic battery principles. batteries only store power, they do not create it.

Automotive Care: Alternators, Batteries, and Fuses - When you understand the juice to your headlights has been reduced,

Batteries - . physics. power cell. device for storing chemical energy and then releasing it in the form of electricity

Batteries - . lesson 2.3. key concepts. what was the first battery made of? how does an electrochemical cell work?.

BATTERIES - . a battery is a galvanic cell, or a set of cells connected in series, that provides a direct current of

Batteries - . katy swancutt engr 302i december 2007. what is a battery?. it is something that converts chemical

Batteries - . kim ianelli. some background on

Batteries - . the first battery. research that lead to the development of the battery was an accident! 1780’s luigi

BATTERIES - . what does a battery do?. energy transformation: chemical energy – stored in chemical compounds electrical