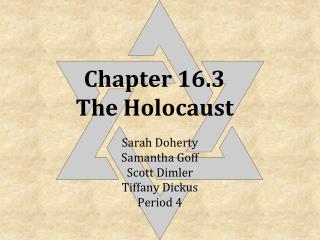 The Holocaust Chapter 16.3 - . during the holocaust the nazis executed 6 million jews and 5 million other

Chapter 16.3 - . protecting your credit. what can you do to correct billing errors ?. in your lifetime you will probably

The Holocaust Chapter 16-3 - . the persecution begins. as soon as hitler took power he ordered all non aryans to be fired

16.3 - . the process of speciation. recall that biologists define a species as a group of organisms that breed with one

Chapter 16.3 Advances in Genetics - . mr. perez. impacts of biotechnology. biotechnology is the application of a

Chemistry 16.3 - Colligative properties of solutions. the wood frog is a remarkable creature because it can survive being

The Holocaust - . in words and pictures taken from the united states holocaust memorial museum web site:

The Holocaust - . andrea richardson &amp; alicia smith. adolf hitler. “once i really am in power, my first and

The Holocaust - . imagine if…. imagine: day