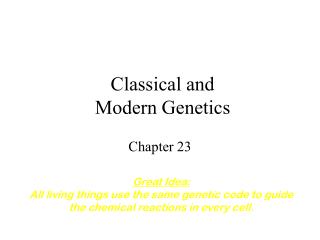 Classical and Modern Genetics - . classical and modern genetics. “genetics”: study of how biological information is

Classical Genetics - . gregor mendel: father of genetics . law of segregation: alleles separate during the formation of

MODERN GENETICS - . what is cloning?. making an exact genetic copy of a cell, organ or an organism this process uses

MODERN GENETICS - . modern genetics. who discovered the structure of dna? everyone seems to know watson and crick, but