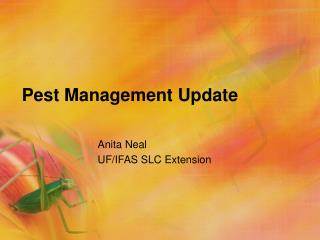 Pest Management Update. Anita Neal UF/IFAS SLC Extension. A New Exotic Soft Scale Insect on Croton in South Florida (Hemiptera: Coccoidea:Coccidae). This is an undescribed species in an undescribed genus of unknown origin. Currently, efforts are being made to describe this new scale insect. .

Pest Management - . 1/6/12. what is a pest?. any species that interferes with human welfare by competing with us for

Pest Management - 22. pest management. overview of chapter 22. what is a pesticide? benefits and problems with

Pest Management - . classes, functions , methods. pests – 100 species cause 90% of damage . any organism that

INTEGRATED PEST MANAGEMENT - . in palestine. introduction. - agriculture sector is considered one of the major productive