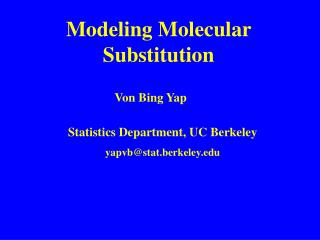 Modeling Molecular Substitution Von Bing Yap Statistics Department, UC Berkeley yapvb@stat.berkeley.edu Variations on a theme Human genome project furnishes sequences from a few individuals, but is relevant to all of us: we are very similar. We are also slightly different: polymorphisms.

Molecular Modeling - . the compendium of methods for mimicking the behavior of molecules or molecular systems. points for