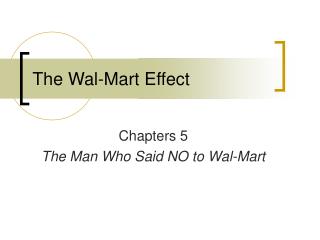 The Wal-Mart Effect - . by delphine marini and bridget wolansky. chapter one. who knew shopping was so important?. what

The Wal-Mart Effect Chapter 6 - . brian dorward. what information did emek basker need in order to analyze the impact of

Wal*Mart - . wal*mart had a market to book ratio of 7.6 market capitalization (price x # of shares) is 7.6 times its book

Wal-Mart - . about. wal-mart was founded by sam walton, who opened the first official wal-mart in 1962, and incorporated

WAL-MART - . case study: can a company be too successful ?. http://www.pbs.org/itvs/storewars/stores2.html

WAL-MART - . wal-mart. “these are not complicated questions, but we have never systematically asked for this kind of