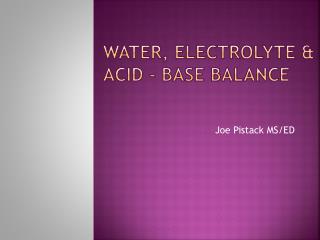 Water, Electrolyte & acid - base Balance. Joe Pistack MS/ED. Distribution of Body Fluids. Intracellular-water located in all the cells of the body. About 63% of the water is located in the intracellular compartments. Composition includes: K+ Chapter 16: Aqueous Ionic Equilibrium - . buffers. s olutions that resist changes in ph when an acid or base is added act