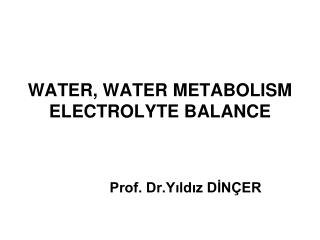 Water and Electrolyte Balance in Animals - . chapter 42. water balance and animals. chemical reactions of life are in

Water, electrolyte, and acid-base balance - . distribution of body fluid. most fluid is inside the cells interstitial-

Water, Electrolyte, and Acid-Base Balance - . function of water : most of cellular activities are performed in water

Water Balance - . section 7.6 page 353. water balance. it is important to regulate the amount of water in the body. if

Water Balance - . by maddie weber. history of melbourne water. throughout history people have switched to systems to make