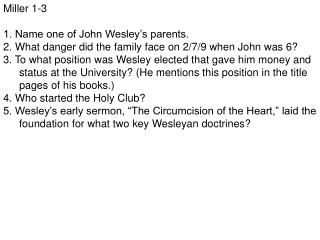 Miller 1-3 1. Name one of John Wesley’s parents. 2. What danger did the family face on 2/7/9 when John was 6? 3. To what position was Wesley elected that gave him money and status at the University? (He mentions this position in the title pages of his books.) 4. Who started the Holy Club? Topic X Personal software process (PSP) - . parts of this topic use material from the textbook w. s. humphrey, “a

Office of Career &amp; Technical Preparation - . parents as partners. how do we better involve parents in

THE CRUCIBLE - . what you need to know about the context of this famous play. firstly, what is a crucible?. crucible: a

The Photography of John Long - Erie rr company photographer, john long took this photo of an eastbound freight at

Learning How to Kiss A Frog - . a presentation designed for parents and families of middle school students. katherine