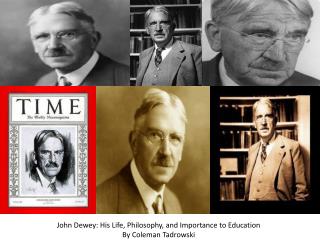 John Dewey. John Dewey: His Life, Philosophy, and Importance to Education By Coleman Tadrowski. Family. John Dewey was born on October 20, 1859, in Burlington, Vermont His father was a merchant and proprietor of a tobacco shop His mother was a daughter of a wealthy farmer John Dewey - . “education is not a preparation for life; education is life itself.”. biographical information. 1859

John Dewey - . father of progressive education. background on dewey. 1859-1952 born in burlington, vermont went to the

John Dewey - . “education is not preparation for life; education is life itself.”. sarah, christa, dylan, and kelly.

Definitions – John Dewey - . critical thinking is: the active, persistent, and careful consideration of a belief or

unit: 3 JOHN DEWEY - . john dewey life’s sketch. - he is one of the greatest american modern thinkers, educationist and

John Dewey is my hero… - . in 1934 dewey wrote a book called art as experience…. in it… he laid out the difference