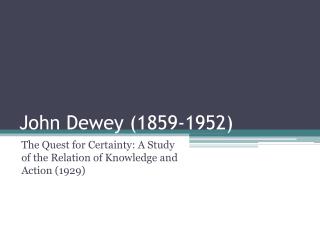 John Dewey (1859-1952). The Quest for Certainty: A Study of the Relation of Knowledge and Action (1929). Security . A primary goal of human beings’ is their search for security. First through mythology and superstition and the use of emotions and inner attitudes. John Dewey - . “education is not preparation for life; education is life itself.”. sarah, christa, dylan, and kelly.

John Dewey - . father of progressive education. background on dewey. 1859-1952 born in burlington, vermont went to the

John Dewey (1859-1952) Experiential Education - . “failure is instructive. the person who really thinks learns quite as

John Dewey - . “education is not a preparation for life; education is life itself.”. biographical information. 1859

unit: 3 JOHN DEWEY - . john dewey life’s sketch. - he is one of the greatest american modern thinkers, educationist and

John Dewey - . “the need for a philosophy of education.”. objectives: how does dewey view the nature of the child and

Learning Theories - . by: antonio zubieta. cognitivism and behaviorism. are two types of theories that have influenced