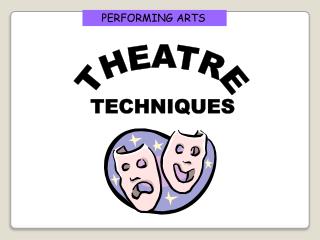 PERFORMING ARTS . THEATRE. TECHNIQUES. WHAT IS THE PURPOSE OF THIS UNIT ?. When you are ready to begin devising your play, you will need to use different theatrical techniques. Use them to create and develop plays and characters that will be of interest to the audience. Grand Theatre Geneve & Theatre Du Leman - Have you ever heard of the largest theatre house in geneva? if not then

READERS THEATRE - . blocking and staging. fourth wall- in conventional theatre, the imaginary wall through which the

restoration theatre - Where did we leave off?. at the end of the elizabethan era, we found that the puritans had come in

Theatre Vocabulary - . ad-lib. make up words or actions, usually to cover a mistake in a performance. anticipating.

Elizabethan and Jacobean Theatre: An Introduction - . a few dates. 1576 building of the first public theatre, known as

Exploring Theatre History: 1800 to the Present - . romance among theatre. romanticism- an emotional escape into