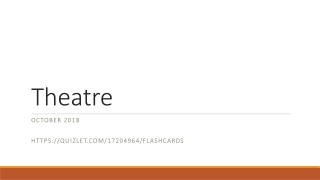 Theatre. October 2018 https://quizlet.com/17204964/flashcards. Tuesday, October 9. Roles for the stage/screen: Principals – lead roles - tells the primary story Supporting roles – move the story, give info Who are the principals in Shrek the musical ? Who are the supporting characters?. Grand Theatre Geneve & Theatre Du Leman - Have you ever heard of the largest theatre house in geneva? if not then

READERS THEATRE - . blocking and staging. fourth wall- in conventional theatre, the imaginary wall through which the

restoration theatre - Where did we leave off?. at the end of the elizabethan era, we found that the puritans had come in

Theatre Vocabulary - . ad-lib. make up words or actions, usually to cover a mistake in a performance. anticipating.