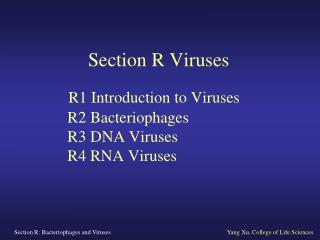 Transmission of Viruses - . introduction vocabulary routes of transmission some examples “biology” of viruses.

DNA VIRUSES - . dna viruses. except for poxviruses, transcription occurs in the nucleus and translation in the

INTRODUCTION TO VIRUSES - . viruses they are the non-cellular form of life. a virus is an obligate intracellular

VIRAL REPLICATION - . viruses replicate in one of two ways: lytic lysogenic. lytic cycle . for each step use the

Viruses - . smallpox. the year was 1777. it was a bold executive decision. faced with a bio-terrorist threat, the