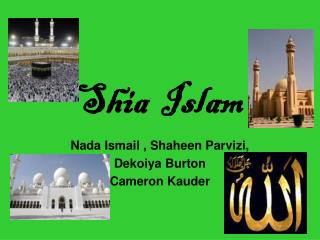 Shia Islam. Nada Ismail , Shaheen Parvizi, Dekoiya Burton Cameron Kauder. Origin/Story. After the last prophet, Mohammed, died in 632 AD, a successor or caliph was supposed to be chosen. (There is debate weather or not Mohammed had chosen a caliph before he died) Hand Of Fatima Shia Islam - The hand of fatima, furthermore identified as the hamsa, has bottomless representative

Sunni and Shia - . the divisions of islam. who should be caliph?. a caliph is the leader of the islamic faith after

Sunni vs. Shia - . deconstructing islam for the classroom. what do we know about sunni and shia islam?. images of sunni

Who is Shia ? - . …the true follower of ahlul bayt

Shia Online Quran Classes - We can find everything online and we can buy different products online. the internet offers