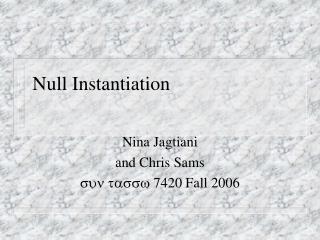 Null Instantiation. Nina Jagtiani and Chris Sams  7420 Fall 2006. FrameNet. What is Null Instantiation?. There are cases where arguments are semantically present, but absent syntactically. Semantically, we can categorize the missing argument by how it is interpreted. Constructors And Instantiation - . constructor basics . every class must have a constructor even abstract classes!! no

NULL Functions - . what will i learn?. nested function list at least four general functions that work with any data type

Null Values - . it is possible for tuples to have a null value for some of their attributes the predicate ‘ is null ’

The Null Hypothesis - . modus tollens* : the logic of the null

Null Hypothesis Significance Testing - . what the heck have we been doing this whole time?. some thoughts.