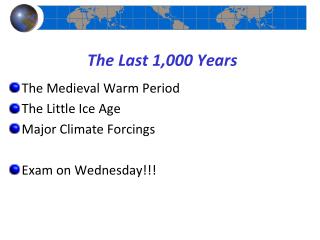 Climate change over the last 1,000 years Continued ……. The Orbital Monsoon Hypothesis - Is the 20th century warming

Stalin the last years - . or, how we really miss you. the great patriotic war. 22 june 1941: operation barbarossa, the

The Last Ten Years - . derek law, university of strathclyde. ancient history. 20 years ago we saw the first cd-roms with

Over The Last Three Years… - . the real estate market has been how should i put it... less robust than it has been in

Developments (last 20 years) - . increasing interest in and advocacy for mixed methods evolving understanding of what is