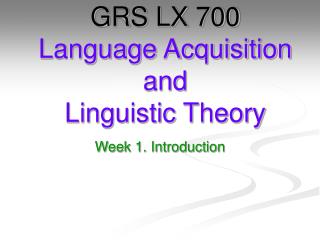 What is a CORPUS? - “ a corpus is a collection of pieces of language that are selected and ordered according to

Linguistic Features of Jamaican Creole - . communication one. introduction. in this presentation we will discuss the

Building Natural Language Generation Systems - . robert dale and ehud reiter. what this tutorial is about. the design and