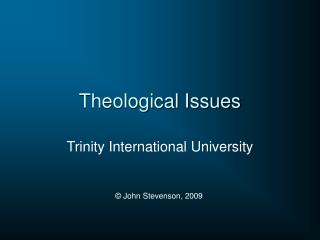 Theological and Philosophical issues of the 19 th Century - . christianity in britain. anglican church 39 articles of

INTERDENOMINNATOINAL THEOLOGICAL CENTER - This is how we do it. interdenominnatoinal theological center. in the itc . by.

THEOLOGICAL RESEARCH PREPARATION - . tom power. foundational questions. what is your topic? why does it interest