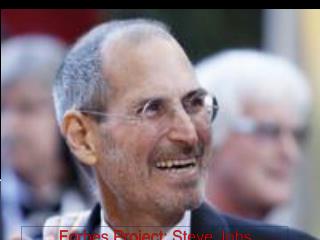 Forbes Project: Steve Jobs. In the life of Steve Jobs. Steve was born February 5, 1955. He was adopted by Paul and Clara Jobs. He is married to Laurene Powell Jobs. They now reside in Palo Alto, California. He also has four children. Steve is the founder of Apple and Pixar. Do you know business? - . answer the following questions. find out if you are a business leader. 1. who are “the two

The Centre of Education № 1682 - . multimedia project : “steve jobs. the story of possession .”. presented by 7a

Bill Gates v. Steven Jobs - . by mark van der merwe. 1. outline. i. the history of bill gates and of steve jobs: a. bill

Steve Jobs Made by Akchurina Alena - . steven paul jobs was born in san francisco on 24 february 1955 the jobs family

Steve Jobs' 12 Rules of Success - . lessons from steve jobs, founder of apple computers. do what you love to do. find

Steve Jobs - . done by: rima m enhal. information about steve jobs. steve jobs is from syria but he lived in america, and