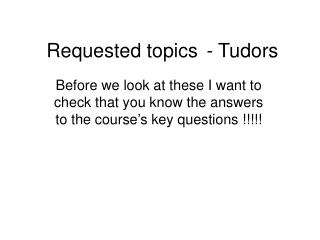 Requested topics - Tudors. Before we look at these I want to check that you know the answers to the course’s key questions !!!!!. Religion. What was the state of the Church on the eve of the Reformation? What were the motives for religious change? The Tudors - Elizabeth i. henry viii. anne boleyn. william shakespeare. why were they important?. who were they?. the

The Tudors - . learning objective: to learn about tudor exploration. the tudor navy. when henry viii came to power,

The Tudors - Section one:to investigate: what was the war of the rosesclick here to see mrs weekes facts how did henry

The Tudors - . by lauren doyle.

Tudors - Henry 7. henry tudor defeated king richard 3 at the battle of bosworth in 1485 and became the king.this called

The Tudors - . a year 4 autumn term module. section one: to investigate: what was the war of the roses click here to see

The Tudors - . we are going to learn more about the food eaten in tudor times. the poor. there were a great many poor

THE TUDORS - . introduction. locating the tudors in time. the tudors ruled the kingdom from 1485 to 1603 . the reigns of

Tudors By Keelan - . crime and punishment. punishment was used when someone broke the law. this is the pillory used for

The Tudors - . we are going to learn more about the food eaten in tudor times. tudor kitchen. kitchen now. the poor.

JUSTICE REQUESTED - Psalm 35. justice requested. contend, o lord, with those who contend with me; fight against those who

THE TUDORS - . cures. blood letting. if you have a disease your limbs get cut off to let the bad blood out!. leeches. in

Tudors Revision - . learning outcome: all will: identify the key terms of the tudor period most will: describe some of

The Tudors Quiz - . click on the question mark to continue. question one . did the tudors rule for 118 years b) 119

THE TUDORS - . click if you dare. challenge 1. you have came across king h enry the viii what are you going to do. find