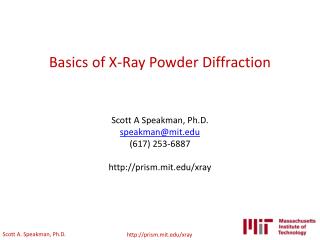 Basics of X-Ray Powder Diffraction. Scott A Speakman, Ph.D. speakman@mit.edu (617) 253-6887 http://prism.mit.edu/xray. Training Required to become an Independent User in the X-Ray Shared Experimental Facility at the Center for Materials Science and Engineering at MIT. powder x-ray diffraction - How do we identify/individualize minerals, rocks, soils and other trace evidence?plm-polarized

X-Ray Diffraction - . me 215 exp#1. x-ray diffraction. x-rays is a form of electromagnetic radiation having a range of