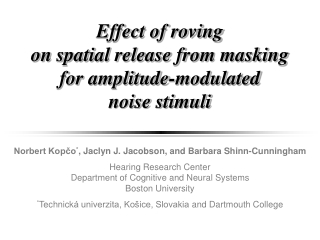 The effect of stimuli deprivation on neuroplasticity - . by katie and laura. terms

Effect of Reverberation on Spatial Unmasking for Nearby Speech Sources - . barbara shinn-cunningham, lisa mraz, and

The Effect of the Apparent Baseline on Fringe Amplitude and Period - . by dana dawson rhonda tully july 2004 mst 562.

Masking for SRT - . crosshearing suspected when srt te – ia ≥ best bc nte in that case, present speech noise to

Effect of Combination of Methocel K4M, K15M And K100M on the In Vitro Release of Aripiprazole from Controlled Release

Perception of stimuli - . by martin samaj ib study guide: 133. perception and stimulus. perception – the act of