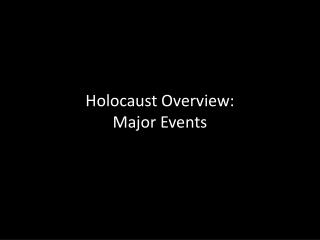 Hebrew and Judaism - . chapter 2 section 3 pages 45-49. the hebrews and judaism. main idea the ancient hebrews and their

Introduction to The Holocaust - . steps to genocide 1933 to

The Nazi Holocaust - . extermination of the jews. standard whii.12b: the student will demonstrate knowledge of the

Holocaust - Diary of Anne Frank Web Quest - . through the use of the resources in this web quest, you have the

Major Hazard Facilities - . preparing and managing a safety report. overview. the seminar has been developed to provide: