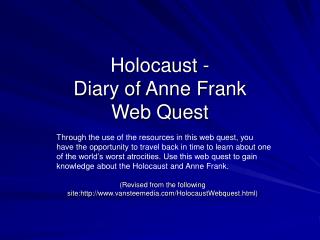 Holocaust - Diary of Anne Frank Web Quest. Through the use of the resources in this web quest, you have the opportunity to travel back in time to learn about one of the world’s worst atrocities. Use this web quest to gain knowledge about the Holocaust and Anne Frank. . A Short Monsoon Diary - . do you know what is a diary? it is a record of personal experiences written day after day over

A Brief Guide to Judaism - . a curriculum support presentation for the study of the holocaust. created by the birmingham

My Imaginary Diary - . by niv hachlili. my imaginary travels to wallland 1. nine meters down, don't look, you might fall.

Themes of Elisa’s Diary - . unit 1, lesson 5. objectives for today. students will understand what themes are and will

Introduction to the Holocaust and Anne Frank - . literature 8 – mrs. munnier. what was the

A Brief Guide to Judaism - . a curriculum support presentation for the study of the holocaust. created by the birmingham

Holocaust: Video Questions - . in the 1940s, who was driven out of their neighborhoods and homes? what is the holocaust?

Achilles as a Hero - . some definitions of &quot;hero&quot; lord raglan's hero pattern the hero pattern applied

Incorporating Literature into the Study of the Holocaust - . pam gannon teacher librarian september 2007. the soul of man

Anne Frank - . anne frank. anne frank’s life was short. she was only fifteen years old when she died in 1945. she was

Anne Frank &amp; the Holocaust - . by micheal raines. a: anne