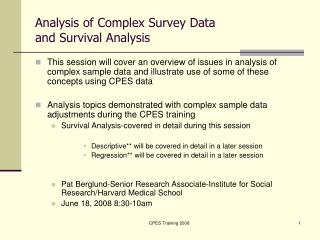 Analysis of Complex Survey Data - . katherine m. keyes kmk2104@columbia.edu. purpose of this class. teach you how to

Survival Analysis - Mice given p388 murine leukemia assigned at random to one of two ... example - navelbine/taxol vs

Survival Analysis - . key variable = time until some event. time from treatment to death time for a fracture to heal time

Survival Analysis - . in many medical studies, the primary endpoint is time until an event occurs (e.g. death, remission)

Survival analysis - . and the legend of the exploding barbeque…. the problem. barbeques, while tasty, use gas bottles.