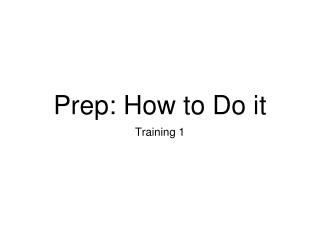 Prep: How to Do it. Training 1. How to prep effectively. DO NOT write a speech, spend your 15 minutes talking and writing Write bullet points, try to have 3 bits of analysis for each point you make Don ’ t do anything for the first few minutes, have a think about the motion. Prep Plus and CRS Plus - . software programs for registering, editing, linking, consolidating, and maintaining central

Welcome - . this is a power point test prep. each question has one correct answer. which of the following is not a

Much Ado About Nothing - . test prep. this powerpoint is designed to help you review for the upcoming test. use your

Tenofovir based PrEP technologies in women : what do we currently know? - . linda-gail bekker the desmond tutu hiv centre

Synonyms, Antonyms, Homographs, Homophones - Www.elatestprep.com. synonyms: words that have the same or almost the same