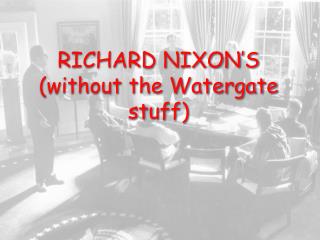 RICHARD NIXON’S (without the Watergate stuff)

RICHARD NIXON’S (without the Watergate stuff). Was Nixon’s administration successful in foreign policy?. Richard Nixon. President of the U.S. from 1969-1974. Vice President under Eisenhower from 1953-1961. Served in the Congress from 1946-1952.

RICHARD NIXON’S (without the Watergate stuff)

Nixon and Watergate - . the election of 1968. nixon campaigned as a champion of the &quot; silent majority

Richard Milhous Nixon - . by. gina song research from world book encyclopedia. his birth and death. mr. nixon was born in

The Watergate Scandal - . the rise of cynicism. the nixon years. richard nixonâ€™s political career anticommunist in

Watergate: Nixon’s Downfall - . how does the watergate cover up lead to nixon’s downfall?. all the president’s men

The Nixon Presidency - . foreign affairs watergate. what do you know about nixon?. election of 1968. richard nixon

January 24, 2012 - . what was watergate and how did if affect america? quiz section 1 hope you did your homework!

Nixon and Watergate - . the election of 1968. richard nixon only narrowly won the 1968 election, but the combined total